Voices From the rocks

Its taken a long time -ten years to see the revival of Voices from the Rocks -the Story of the Matopos. Actually it has a longer name that includes violence and environment. Its based on an oral history interpreted by the late Professor Ranger formerly of Oxford University. He is renowned for his research into the history of Matabeleland. This academic work published by James Curry in Oxford though has been reinterpreted for the stage by the late Mandla Sibanda with music and dance by the late Simon Banda.

The production had its last major outing at the Zimbabwe International Book Fair in 2004 and it represents the pillar of Sunduza’s recent achievements in what is seen as a massive revival of the dance theatre company that achieved huge success internationally in the 1990s.They have appeared at Womad , Glastonbury, Edinburgh Festival, many UK theatres including the Crucible in Sheffield and South Bank in London, they toured Canada, South East Asia. They went into semi retirement whilst their illustrious leaders worked in the British schools supporting a huge out reach programme to over 45 000 children in week long workshops during the economic slide.They proved clearly that African artists can do much more than merely teach drumming and dance to British kids.

Its taken Sunduza three years to recover from the loss of leadership and with a largely new talented cast- some of whom were in the company at its earliest inception. As Ranger pointed out it is most exciting to see young people take on their own history and make it accessible to people in Bulawayo in an enjoyable frame work. Its a work that reflects the land issue in microcosm looking at the cultural and environmental issues as understood from different cultural perspectives. The area is now a UNESCO World heritage site and unique in Zimbabwe’s landscape.

Beginners Photography Workshop – Once Every Month

Requirements
1. No prior photography knowledge
2. We recommend a digital DSLR camera or a digital compact with manual settings
3. Memory cards
4. Fully charged battery
5. Lots of energy
6. Comfortable shoes!
7. Budding photographers under 16 you must be accompanied by an adult
8. Camera hire by arrangement please Contact Us before booking to avoid disappointment

Description
A very popular digital photography course for Beginners that is fun, creative and inspirational
If you have a camera and are struggling with the settings then we will teach you how to use and understand them. Our workshops also have the luxury of several Canon cameras and lenses for you to borrow, so you may be looking to upgrade your equipment or just wish to see what another lens could do for your photography.
We have a practical approach to teaching photographic and technical skills and will show you how to simply navigate your way around the menu’s and discover the joy of using the camera in its manual settings. By the end of the day you will feel confident and know the pictures you are taking are not by luck but by your judgement and skill, plus of course its a great city to photograph

The groups are small with no more than 10 students to one tutor.

Learn about:
1. Your DLSR camera functions
2. Aperture
3. ISO
4. Shutter Speed
5. Composition
6. What lenses to choose and how to use them
7. Working with natural light

During your time with us we will also instruct you on the compositional side of photography giving you pointers on portraiture, landscapes, nature etc. How to look for light, texture and colour. To get the best out of your models and how to get great poses. But more importantly how to take your photographs from snaps to high quality images

Time: 9 am to 4pm with lunch break up

Workshops explore ways to use hip hop to express yourself, how to find out what you care about, and how to make it rhyme! the workshop will use popular songs to explain the different kinds of rhymes such as internal rhymes, multi-syllabic rhymes, and near or “slant” rhymes. Flow, syllables, and line structure are also a part of the lesson and by the end of two days, each participant would have written their own rap or song.

Another amazing chance to spend the day with professional dancers, learning break dancing, hip hop and other street styles including popping, house and locking. Build up your skills, become part of a crew, build a routine and show off your skills in a battle when you perform at the end of the day. The group will be split according to age and experience once the workshop begins, so everyone gets to go at their own pace.

Amasiko Lemvelo will be attending DOA DOA  East African Performing Arts Market in Jinja Uganda. DOA DOA  East African Performing Arts Market provides a platform for professional networking and joint learning, bringing together various stakeholders and link people, organizations, businesses, knowledge and technology with a view to create demand and develop a market for the performing arts and unlock the potential of the East African creative industry, making it an important factor for economic, social and cultural development throughout the region. To build new foundations and new relationships new links and cultural exchange in creative economies.

The Arts With A Purpose [AWAP] Traditional Dance Training Workshop took place from 13th of March 2015 at the Gweru Theatre with 56 participants from seven districts of the Midlands Province.The programme focused on skills development, theory analysis, confidence building and promotion of culture through dance. workshops went on to 5 district in midlands area and still workshops will continue from June 2016 to take place in other  4 districts.

WORKSHOP RESULTS
By conducting the workshop the following objectives were achieved:
• Identification of the needs of traditional dance instructors through the programmes interactive process in the group discussion and the subsequent evaluation of the programme
• Acquisition of traditional dance knowledge and practice through the presentation of concepts in Wosana traditional dance
• Application of skills in traditional dance through performance in the skills training programme which required participants to actively practice dance skills in drumming , clapping, dancing and singing.
• Enhancing technical and choreographic skills of participants by encouraging creativity. This was achieved by thorough explanations through presentations, dance demonstrations and the discussion sessions.

STRENGTH OF THE PROGRAMME
• The workshop forged stronger networks between the Ministry of Primary and Secondary Education and National Arts Council of Zimbabwe so as Arts and Culture resources persons and traditional dance teachers.
• [ Instructors/trainers/choreographers/stage managers/researchers] who are teachers of the traditional dances in Zimbabwe were successfully trained in Wosana traditional dance.
• Fifty six participants from seven districts attended the workshop .While two Gweru City Council Social Service instructors also attended the workshop as they also work with school children during the school holidays at community centres.
• The workshop had adequate planning and unity of purpose displayed by the Ministry of Primary and Secondary Education officials, National Arts Council of Zimbabwe officials, NAPH , Amasiko Lemvelo Learning Trust and teachers who attended the workshop
• Supporting literature and videos were presented to assist trainers in grasping concepts.
• The workshop provided quality training in the sequential and gradual development of concepts through theory presentations , drumming , clapping , singing and dance demonstrations , group activities and discussions.
• The venue was accessible to all participants and had a stage which is a prerequisite of creative performance arts training

Preparations for the Wosana programme will began in June 2016

An intriguing story about a lion in Hwange National Park that was lured and killed out of the park. The story tells about the communities surrounding the area Hwange, the social, media reaction and environments concern of wild life and nature. Cecil named after Cecil Rhodes and another lion believed to be Cecil’s brother were noticed in Hwange National Park in 2008. In 2009, Cecil and his brother encountered an established pride, which resulted in a fight in which Cecil’s brother was killed and both Cecil and the leader of the pride were seriously wounded; the leader was subsequently killed by park rangers because of the wounds he had received in the fight with Cecil. Cecil retreated to another part of the park where he eventually established his own pride which had up to 22 members. In 2013, Cecil was forced out from the area by two young male lions into the eastern border of the park. There, he created a coalition with another male lion named Jericho to establish two prides which consisted of Cecil, Jericho, half a dozen females and up to a dozen cubs sired by Cecil or Jericho. Hugely inventive production almost overwhelming in its sheer scale and complexity The Cecil is an outstanding creative and theatrical production.

The Festival will take place in 30 September 2016 in Shabani Town . It will serve as an intervention to integrate residents and communities along the delta area. Stroll through beautiful Arts festival and enjoy this juries fine arts, performances, games and crafts festival featuring artists from across the country. Great food and art activities for children make this fun event for the whole family. The aim of the festival is to activate public space in the Shabani through artistic interventions, the use of performance and new media, and most essential, audience participation. The aim of the festival is to change and challenge perceptions, empowerment of individuals and communities and the creating of awareness, not only with audiences and residents, but also with mines, organizations and authorities.

Shabani, formerly Shabani,  town, south- central Zimbabwe. Its name is derived from shavani, a Sindebele word meaning “finger millet,” or “trading together.” Surrounded by low hills, it is on direct rail links to Harare (formerly Salisbury) and Bulawayo in Zimbabwe and to Maputo in Mozambique. The adjacent Shabani mine is its major economic asset. Shabani was created a village in 1920 and a town in 1930

Amasiko Expo 2016
Creativity with Visibility
Artists are still trying to figure out how to market and expose themselves. One of the greatest benefits of creativity with visibility is leading to more clients or customers and the community. The “Amasiko Expo” is set to showcase local talent. Performing artists from across the City will take the stage and share their art at the 2016 Amasiko Expo. The Expo is open to everyone, artists of all skill levels and communities. Performers will take the stage alongside with experienced artist for memorable Expo performances! 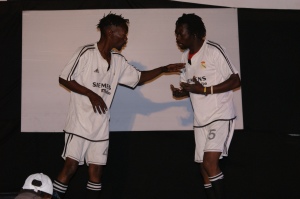